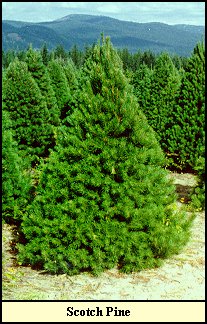 Scots pine is an introduced species which has been widely planted for the purpose of producing Christmas trees. It is an extremely hardy species which is adaptable to a wide variety of soils and sites. As a Christmas tree, it is known for its dark green foliage and stiff branches which are well suited for decorating with both light and heavy ornaments. It has excellent needle retention characteristics and holds up well throughout harvest, shipping and display.

The needles of Scots pine are produced in bundles of two. They are variable in length, ranging from slightly over 1-inch for some varieties to nearly 3-inches for others. Color is likewise variable with bright green characteristic of a few varieties to dark green to bluish tones more prominent in others. The undersides of Scotch pine needles are characterized by several prominent rows of white appearing stomatal openings.

The bark of upper branches on larger, more mature trees displays a prominent reddish-orange color which is very distinctive and attractive. Large amounts of cones are likewise produced which often persist on the tree from one year to the next. Like most pines two growing seasons are required to produce mature cones. On excellent sites within its native range mature trees may reach a trunk diameter of 30 inches or more and individual trees may exceed 125 feet in height.

Scots pine is native to Europe and Asia. From the British isles and Scandinavian peninsulas through central Europe south to the Mediterranean and east through eastern Siberia, Scots pine can be found at varying elevations.Scots pine was introduced to North America by European settlers and has long been cultivated, especially in the eastern United States and Canada. It is adaptable to a wide variety of sites and accordingly, has been widely planted for both Christmas tree and ornamental purposes. Although plantations have been established in the United States for the purpose of producing forest products, the species does not perform as well as in its native habitat.

Scots pine is reproduced from seed. More than thirty five different seed sources or varieties are commercially recognized. Seed is obtained by international collectors and marketed through reputable seed dealers. A few seed orchards have been established in the United States from which seed is locally collected. For Christmas tree production purposes seed is usually sown in the spring and the resulting seedlings are allowed to grow for two years in the nursery bed before they are lifted and sold to Christmas tree producers. There has been some research by university personnel to identify and produce genetically improved planting stock, although these efforts have not been totally successful.

In Europe and throughout several countries in Asia, Scots pine is an important species of high economic value. Forest stands containing Scots pine are managed to produce pulpwood, poles, and sawlogs from which dimension and finish lumber is produced. Logs from trees of large diameters are processed into veneer and used in manufacturing plywood. The species is also valued as an ornamental and landscape plant and has been widely planted in parks and gardens.

As a Christmas tree Scots pine is probably the most commonly used species in the United States. Because of its ease of planting, generally high planting survival and favorable response to plantation culture it has been widely planted throughout much of the eastern United States and Canada. For several years it was the favorite species of large eastern wholesale growers because of its excellent harvesting and shipping qualities. It is also a preferred species for many choose and cut growers in much of the eastern and central United States.

When established in plantations usually 6 to 8 years are required to produce a 7 to 8 foot tree. The tree requires annual shearing, usually beginning the second or third year following planting and continuing on through the year of harvest. Scots pine is host to a number of insect and disease problems, and continued protection from foliage and stem damaging agents is necessary. The species is not demanding with respect to fertility or moisture and supplemental fertilization or irrigation is not considered necessary.

As a Christmas tree Scots pine is known for its excellent needle retention and good keepability. It resists drying and if permitted to become dry does not drop its needles. When displayed in a water filled container it will remain fresh for the normal 3 to 4 week Christmas season. Like all natural trees it is readily recyclable and has many different uses following the Christmas holidays.