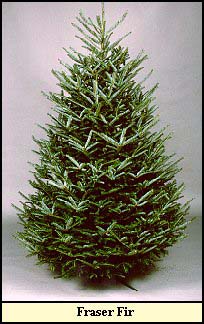 In many respects, Fraser fir and balsam fir are quite similar, although the geographic ranges of the two species do not overlap. Some scientists even suggest that because of the many similarities, the two species were once a single species which has since evolved into the present-day forms.

Fraser fir was named for John Fraser (1750-1811), a Scot botanist who explored the southern Appalachian Mountains in the late 18th century. The species is sometimes called Southern balsam or Southern balsam fir. Locally Fraser fir is known as “She balsam” because of the resin filled blisters on the tree’s trunk. Red spruce, often associated with Fraser fir, is called “He balsam” and lacks the distinctive blisters.

Fraser fir is a uniformly pyramid-shaped tree which reaches a maximum height of about 80 feet and a diameter of 1-1.5 feet. Strong branches are turned slightly upward which gives the tree a compact appearance.

Leaves (needles) are flattened, dark-green with a medial groove on the upper side and two broad silvery-white bands on the lower surface. These bands consist of several rows of stomata (pores). Leaves are 1/2 to one inch long, have a broad circular base, and are usually dark green on the upper surface and lighter on the lower surface. On lower branches, leaves are two-ranked (occurring in two opposite rows). On upper twigs, leaves tend to curl upward forming a more “U-shaped” appearance.

Fraser fir is monecious meaning that both male and female flowers (strobili) occur on the same tree. Flowers are receptive in May to June depending on elevation and other environmental conditions. The species is wind pollinated, and cones mature in a single season. At maturity, cones are 2-2 1/2 inches long with bracts longer than the scales and appearing reflexed (bent over). The presence of these visible cone bracts is a distinguishing feature of Fraser fir as compared to balsam fir. Upon ripening in September to November, cones fall apart leaving an erect central core. Red squirrels are the primary consumers of seeds.

Fraser fir is intermediate in shade tolerance and is usually found on fertile, rocky to sandy soils which are acidic. Natural associates are red spruce, beech and yellow birch. Rhododendrons also are found in this ecosystem, and add significant beauty during their flowering season.

The most damaging natural enemy is the balsam woolly adelgid (formerly called an aphid) which is an imported, wingless insect. Phytophthora root disease attacks Fraser fir, but is most harmful at lower elevations. Some scientists also point to air pollution as a contributor to the decline of many natural red spruce-Fraser fir stands.

The combination of form, needle retention, dark blue-green color, pleasant scent and excellent shipping characteristics has led to Fraser fir being a most popular Christmas tree species. North Carolina produces the majority of Fraser fir Christmas trees. It requires from 7 to 10 years in the field to produce a 6-7 foot tree.

Fraser fir has a somewhat restricted range. It grows naturally only at elevations above 4,500 feet in the Southern Appalachian Mountains from southwest Virginia, through western North Carolina, and into eastern Tennessee. A number of stands occur in the Great Smoky Mountains National Park. Its highest native habitat is Mt. Mitchell, North Carolina (6,684 feet) which is the highest U.S. point east of the Mississippi River. A variety of balsam fir, phanerolepis, occurs in the Northeast United States and Canada and as far south as West Virginia and Virginia (38 degees north latitude). This variety is best described as an intermediate form between balsam fir and Fraser fir and may represent a remnant of a once continuous range of the two species.

Most propagation is by seeds although propagation by cuttings, and grafting has also been used for special purposes. Propagation via tissue culture has been attempted but not on a large scale.

Principal uses are generally the same as for balsam fir, although Fraser fir has been used less for timber because of the difficult terrain on which it grows. The wood is soft and brittle and may be used for pulpwood, light frame construction, interior knotty paneling, and crates. Fraser fir boughs have often been used for “pine pillows” and bed stuffing.