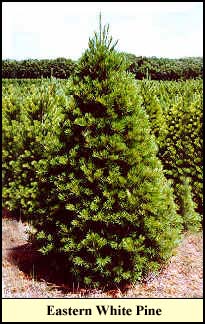 Beginning with the British colonists, eastern white pine (or white pine) has proven to be one of the most important and most desirable species of North America. It is a truly magnificent tree attaining a height of 80 feet or more at maturity with a diameter of two to three feet. White pine is considered to be the largest pine in the United States. In colonial times, white pines above 24 inches in diameter were reserved for England to be used as ships masts. These trees were identified by blazing a broad arrow on the trunk. Because of the colonists general dislike of British rule, this “broad arrow” policy was one more source of friction between the two. Until about 1890, white pine was considered the species of choice for most commercial uses. It is the state tree of Maine and Michigan.

Leaves (needles) are soft, flexible and bluish-green to silver green in color and are regularly arranged in bundles of five. Needles are 2 1/2-5 inches long and are usually shed at the end of the second growing season. Both male and female flowers (strobili) occur on the same tree, with pollination occurring in spring. Cones are 4-8 inches in length, usually slightly curved and mature at the end of the second season. Cone scales are rather thin and never have prickles. Cones also have exudations of a fragrant gummy resin.

Bark on young trunks and branches is smooth and tends to be greenish-brown in color. On older trunks, the bark becomes dark gray and shallowly fissured. Limbs tend to persist, particularly on trees grown without severe competition.

White pine is intermediate in shade tolerance and is commonly associated with eastern hemlock and various northern hardwoods. It is found on many different sites including dry rocky ridges and wet sphagnum bogs, but best development is on moist sandy loam soils. Extensive logging has destroyed most of the original pine forests, but the species is aggressive in reproducing itself and may be found throughout its original range. Due to its desirability and relative ease of nursery production it has also been a major species for reforestation in the northeastern United States and Canada.

White pine is susceptible to white pine blister rust disease, which has alternate hosts of wild currants and gooseberries (Ribes). White pine weevil is the major insect pest, and one which deforms trees by killing the terminal shoots. White pine appears to be more sensitive to pollutants such as, ozone, fluorides and sulfur dioxide than are other species.

For Christmas trees, sheared trees are preferred, although some people feel shearing results in trees too dense for larger ornaments. Needle retention is good to excellent. White pine has very little aroma, but, conversely, is reported to result in fewer allergic reactions than do some of the more aromatic species. To produce a 6-foot tree requires 6-8 years on good sites.

Most propagation is by seed, although the species grafts quite easily. Considerable variation in rooting ability has been observed. About 70 cultivars have been developed for commercial use.

White pine has historically been one of the most valuable lumber trees. It has soft, light wood which warps and checks less than many other species. The wood is adapted to a variety of uses to include cabinets, interior finish, and carving. Early native-Americans used the inner bark as food, with colonists later using the inner bark as an ingredient in cough remedies.

Seeds are eaten by birds such as red crossbills and chickadees. Rabbits may eat the bark of young trees as may porcupines.