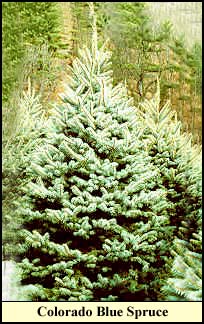 Colorado blue spruce, or blue spruce, is an attractive tree often used for Christmas trees or as ornamentals, particularly in the eastern United States and Europe. It is the official state tree of both Colorado and Utah. The species generally reaches a height of 65-115 feet at maturity with a diameter of 2-3 feet. It has a narrow, pyramidal shape and cone-shaped crown. As trees become older, they often take on a more irregular appearance. While blue spruce grows relatively slowly, it is long-lived and may reach ages of 600-800 years.

Leaves (needles) are 1-1 1/2 inches long on lower branches but somewhat shorter on upper branches. They are 4-sided and have a very sharp point on the end. It is this point which gives the species its name “pungens”, from the Latin word for sharp as in puncture wound. Needles are generally dull bluish-gray to silvery blue and emit a resinous odor when crushed. Some trees have a more distinct bluish-white or silvery-white foliage. The cultivated variety ‘glauca’ is noted for this type of coloration. Nursery managers also select for “shiners” which demonstrate this very desirable characteristic. Needles occur on small peg-like structures on the twig called sterigmata. The sterigmata persist on the twigs after needles have fallen, which is usually after the third or fourth year.

Both male and female flowers (strobili) occur in the same tree, although in different locations. Pollination occurs in late spring and cones mature in one season. In the fall, cones are 2-4 inches long and turn chestnut brown with stiff, flattened scales. Cones generally persist on the tree for one to two years after seed fall.

The bark is thin becoming moderately thick with age. It is somewhat pale gray in small flattened scales when young, then turns reddish brown and furrowed with age.

Blue spruce is moderately shade tolerant and grows best in deep, rich, gravely soils, often along stream banks and other sites with high moisture levels. It usually does not occur in large stands but is found in small groves or in association with Douglas-fir, lodgepole pine, Engelmann spruce or ponderosa pine. A deep penetrating root system makes the species resistant to being blown over.

Blue spruce is finding increasing popularity as a Christmas tree as a result of its symmetrical form and attractive blue foliage. The species has an excellent natural shape and requires little shearing. Additionally, needle retention is among the best for the spruces. Its popularity as an ornamental leads many consumers to use blue spruce as a living Christmas tree, to be planted after the holiday season.

Blue spruce occurs naturally from western Wyoming and eastern Idaho southward through central Colorado and Central Utah. The southern limits are New Mexico and Arizona. It occurs at elevations of 6,000 to 11,000 feet; generally at higher elevations in the more southern areas.

Most propagation is by seed but blue spruce can be grafted or grown from rooted cuttings. Vegetative propagation is more often used to perpetuate the rarer, more desirable forms of the species. Picea abies or Picea pungens are preferred rootstock for grafting.

Over 70 cultivated varieties have been named.

The wood is light to pale brown in color and is lightweight, soft, and brittle. The lack of natural pruning leads to boards often being full of knots. Blue spruce grows in relatively inaccessible locations leading to its not being commercially important as a timber species. The wood is suitable, however, for posts, poles, and fuel.

Blue spruce has limited value to wildlife but does provide cover and seeds for squirrels, rodents and some birds.

In the western United States, the species has found some use in shelterbelts.