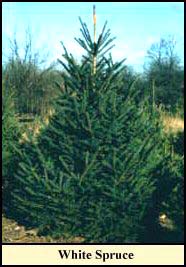 White spruce is a medium-sized conifer found in northeastern United States and throughout Canada. It is the state tree of South Dakota. White spruce has a cone-shaped crown, and when grown in the open develops a conical crown which extends nearly to the ground. This habit along with the spreading branches give it a nice appearance for use as an ornamental. Trees often reach 80-140 feet in height and 1.5 to 3 feet in diameter. The oldest white spruce may reach 300 years of age.

Leaves (needles) are needle-shaped, and are often somewhat crowded on the upper half of the branchlets. Needles are usually 1/2 to 3/4 inch long, blunt at the tip and green to bluish-green in color. Typically, needles are 4 angled (4-sided) and are present on short twig-like structures on the stem (sterigmata). When crushed, needles have a disagreeable odor, thus, the common name of “skunk spruce” or “cat spruce” is often used by those familiar with the species. The bark is thin, light grayish-brown and is produced in irregular, thin, scaly plates.

The species is monecious, meaning both male and female flowers (strobili) are found on the same tree. Pollination occurs in the spring and cones mature in one season. Cones are slender about 1 1/4 to 2 inches long and ripen in early fall. Cones are pale brown at maturity with scales that are thin, flexible, and rounded. Cones usually fall from the tree shortly after seeds are shed.

White spruce is tolerant of a considerable amount of shade. Its best growth is on moist, acidic, loamy soils and is often found on stream banks, lake shores and adjacent slopes. The species seldom occurs in pure stands but grows in association with balsam fir, black spruce, eastern hemlock, trembling aspen, and other northern hardwoods.

Leaves of white spruce are often infected by rust diseases resulting in premature shedding of needles. The two most important insect pests are spruce budworm and spruce sawfly.

As a Christmas tree, white spruce has excellent foliage color, short stiff needles and a good natural shape. Needle retention is better than some of other spruce species.

White spruce has one of the largest ranges of any North American conifer. It can be found from Newfoundland to Alaska and southward to the United States in New England and the Lake States. It occurs from sea level to 5600 ft. in elevation. A taxonomic variety of white spruce, densata, can be found in the Black Hills of South Dakota and is often sold commercially as “Black Hills spruce”. The variety albertiana is sold as “western white spruce” or “Alberta white spruce”, although some experts believe it may be a form of densata. A total of over 30 cultivated varieties of white spruce have been identified.

The wood of white spruce is light, soft, and straight grained. Its primary uses have been for pulpwood, lumber, furniture, and boxes and crates. More elegant uses include sounding boards for pianos and violins. The tough, pliable roots were once used by Indians to lace birchbark canoes and to make woven baskets.

White spruce is important as a source of food for grouse and seed eating birds. Red squirrels often cut cones as they mature and eat the seeds. Porcupines are considered destructive pests as they often eat the bark, particularly of young trees. Black bears may also strip white spruce bark for the sweet sapwood.