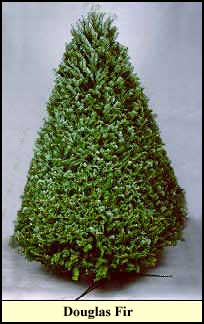 Douglas-fir is not related to the true firs.

This wide ranging species grows from 70 to 250 feet tall. The branches are spreading to drooping, the buds sharply pointed and the bark is very thick, fluted, ridged, rough and dark brown.

The needles are dark green or blue green, 1 to 1 1/2 inches long, soft to the touch and radiate out in all directions from the branch. They have a sweet fragrance when crushed.

Pollen strobili are small and reddish-brown. Young cones are small, oval shaped and hang downward. They are reddish-brown to gray, 3″ long and do not dissipate to spread seed as do true firs (Abies sp.). The cones open in the late summer to disperse the seeds and will continue to hang on the trees through the fall.

The entire range includes central California, western Oregon and Washington, parts of the Rockies and extends north to Alaska. It grows under a wide variety of environments from extremely dry, low elevation sites to moist sites.

On the west side of the Cascades and Sierra Nevada, it is often the predominate species, but usually occurs in conjunction with several other confers. On the coasts, it is associated with western hemlock and other conifers.

Bigcone Douglas-fir (P. macrocarpa), the other Pseudotsuga species in western North America, has a very restricted range limited to Southern California and Baja, Mexico. It is not used as a Christmas tree.

Under natural conditions, Douglas-fir has established primarily after fires on wetter sites. The trees can live for a thousand years, largely due to a very thick bark that allows them to survive moderate fires. Thus many ancient old-growth forests contain large Douglas-fir that represent the legacy of fires that occurred many centuries ago.

Seed is generally germinated in bare root nurseries and increasingly in container nurseries. It is usually sold as a two or three year old transplant.

Research has been done on grafting and rooting from cuttings. The practicality of these techniques has yet to be proven and remains more of a curiosity rather than a new trend to produce seedlings from trees that exhibit superior Christmas tree characteristics.

The Douglas-fir has been the major Christmas tree species used in the Pacific Northwest since the 1920’s. During the following 40 years, nearly all trees were harvested from forest lands. Since the 1950’s, the transformation from growing trees in the wild to culturing them on plantations has been dramatic. Today, few trees come from forest lands.

An interior strain from the Rocky Mountains (P. menziesii var. glauca) has been extensively planted throughout several midwestern state Christmas tree plantations. It is preferred because of its ability to withstand the more harsh growing conditions than the Pacific Northwest seed sources.

Nationally, it remains one of the most popular Christmas trees species. It is shipped to the majority of the states and is also exported to the Hawaiian Islands, Guam and some Asian markets.

Plantation trees are normally sheared and will produce a crop within 7 to over 10 years depending upon the site and growing area.

Douglas-fir is one of the stronger of the softwoods and is widely used for structural purposes. The sapwood is white to pale yellow while the heartwood is orange-red with high contrast between earlywood and latewood.

It is also one of the more common softwoods used in export markets.