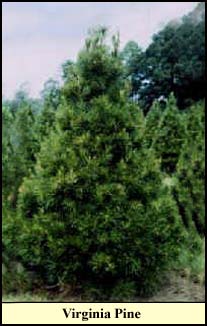 The Virginia pine’s needles occur in pairs. They are twisted and range from 1.5 to 3″ in length. They are relatively short when compared to those of other pines. Loblolly needles, by comparison, are from 4 to 9″ long. Individual needle clusters can remain for 3 or 4 years. They are then shed and replaced with new needles as the branches grow in length.

The branches are stout and woody. The bark is typical for most pines. It forms plates that are reddish brown in color with shallow fissures or furrows. The bark has a coarse appearance.

Cones begin forming in about the fifth year. They are about 2 inches long and are protected by quite prickly scales. Pollination occurs in early June and cones mature in late September to early November of the following year. Open pollination is used in most Virginia pine seed production.

Virginia pine responds well to trimming. And, on Christmas tree plantations their foliage can become extremely dense. As with other pines, these show a tendency to self pruning when grown with competition from other trees. This characteristic becomes apparent after about the sixth year as the lower limbs begin to wither.

Virginia pine has been the staple for the Christmas tree industry in the south since its inception. But in prior times it was not considered to be commercially significant to the forest products industry. Due to the intense demand for planting stock with enhanced Christmas tree characteristics, two genetic improvement programs were initiated. Both were begun in the early 1980’s. One was a Texas Forest Service project and the other was based at Alabama A&M University. In both cases, the respective State Christmas tree associations were major contributors to the effort. After years of progeny tests and selective removal of trees from the seed orchards, growers have Virginia pine seed sources specifically cultured for Christmas tree production.

Virginia pine is considered to be a small to medium sized tree. Breast height diameters of over 31inches and heights of 114 feet have been recorded.

The natural range of the Virginia pine begins in central Pennsylvania and extends southward into northern Mississippi, Alabama and Georgia. Bounded on the east by the Atlantic coast, it extends west into Ohio, southern Indiana and Tennessee.

Using the selection and genetic improvement projects described above, its range has been extended into Florida, Louisiana, Arkansas, east Texas, and southern areas of Georgia, Alabama, and Mississippi.

Virginia pine is almost exclusively propagated through seed germination. There has been some success in rooting cuttings and air layering, however.

In addition to being the original basis of the southern Christmas tree industry, the Virginia pine has been effective in strip mine site reclamation in the eastern and central States, and a source of pulpwood in its natural range. Because the older wood is softened by fungal decay, Virginia pine provides excellent nesting sites for woodpeckers.

Virginia pine Christmas trees are available on both choose and cut farms, and retail lots.